As the 1990s drew to a close, change was still very much a running theme. The late Nineties would see a president impeached, the Good Friday Agreement signed, and an entirely new currency launched across the majority of a continent. With so much competing for people’s attention, how could the Golf MK4 make its mark?

The late Nineties leading into the new millennium were a time of cautious optimism. Fear over the Millennium Bug was mixed with hope for the future as the Good Friday Agreement set the course for peace in Northern Ireland after long years of conflict.

The charts were filled with resurging pop groups as rock ‘n’ roll bad boys such as Liam Gallagher, Ian Brown and Mark E. Smith made headlines for their offstage antics. Reality television started out on its path towards world domination with the launch of the then-ground-breaking Big Brother, while the silver screen was graced with an array of big-budget blockbusters.

The Golf MK4 arrived just in time for 1998, which proved to be a busy year kicked off by a political scandal in the USA that would end with the President being impeached. In the summer France hosted a World Cup that they would go on to win. England, in case you needed reminding, were knocked out on penalties. The year would end as it started, with the Spice Girls at number one in the charts, albeit for the first time without Geri Halliwell.

The MK4 was the first Golf since the MK2 not to be designed by Herbert Schäfer, who was busy enjoying a well-earned retirement. Instead, the job fell to Hartmut Warkuß, Volkswagen’s Chief of Design. Warkuß set about transforming the exterior design of the Golf. Gone were the straight lines in favour of the more curvaceous shape that would inform the design of every subsequent Golf.

New building technology, such as laser welding, meant the Golf MK4 could be built with staggering precision which allowed it to boast a strikingly clean C-pillar linking the roof to the boot. Another immediately noticeable innovation was the clear lens headlights. For the first time, you could see behind the glass and get a look at the rounded headlights, fog lights, and indicators.

During the Golf MK4’s lifespan, the World Rally Driving Championship was being dominated by Finnish pair Tommi Mäkinen and Marcus Grönholm. While you might not have thought it, the Golf MK4 shared more in common with their high-end rally cars than you might assume. The MK4 was the first Golf to come with Volkswagen’s 4MOTION all-wheel drive. It meant that extreme weather, from driving rain to flurries of snow, could be conquered far easier than in the past. Safety was paramount in drivers’ minds in the late Nineties, and from 1998 Electronic Stability Control and Brake Assist came in the MK4 as standard.

The GTI also made its return, this time with a very special edition. 2001 marked the 25th anniversary since the GTI’s launch in 1976, and a celebratory version was released with an astonishing 180PS of power beneath the bonnet. No luxury was spared when it came to the interior, with a perforated leather steering wheel and Recaro seats upholstered in black with red lining. The exterior meanwhile gave the GTI real presence, with 18-inch wheels housing bright red brake callipers, and a choice of three colours - Tornado Red, Reflex Silver, and Diamond Black.

In 2002 the R32 was unleashed. This special edition Golf offered raw power that could accelerate it to speeds of up to 155mph. It also was the first Volkswagen to feature a Dual Shift Gearbox (DSG) that could shift gears in mere milliseconds while also lowering fuel consumption.

While Volkswagen set new trends on the road, Apple was pioneering a new era for music. 2001 saw the launch of the first-ever iPod. Now people could digitize their entire music collection and take it anywhere, all on one small device. It wouldn’t be long before digital downloads became the currency of the music industry, and sales of CDs would start to fall.

That year saw the Harry Potter franchise adapted for the big screen. The first in the series, Harry Potter and the Philosopher’s Stone would prove a monolithic hit at the box office. With takings of $974,755,371, it was the highest-grossing film of 2001, beating competition from the likes of The Lord of the Rings: Fellowship of the Ring, Shrek, and Ocean’s Eleven. The awards season however was dominated by Ron Howard’s critically acclaimed A Beautiful Mind which, along with a slew of other awards, bagged Best Film at that year’s Oscars.

The following year Europe’s currency shifted from several different variations to a unilateral one, the Euro, which by March 2002 was being used in 19 out of 27 EU countries.

Japan and South Korea meanwhile hosted the 2002 World Cup. It was won by beaten 1998 finalists Brazil, who got to the final thanks to a now-infamous Ronaldinho free-kick that sailed over the helpless David Seaman’s head. In television, the first singing competition Pop Idol saw an unlikely winner as Will Young bested the bookies’ favourite Gareth Gates in a public vote.

At the same time, Volkswagen was also looking for the next star to continue the Golf’s established reputation as one of the finest hatchbacks on the market. Nearly 5 million Golf MK4s had been produced and it had won several awards including Top Gear’s Best Family Car and What Car’s Best Small Hatchback. But never one to rest on its laurels, Volkswagen was looking to the future.

It was time to release the Golf MK5, an exciting new car for a flourishing new millennium. 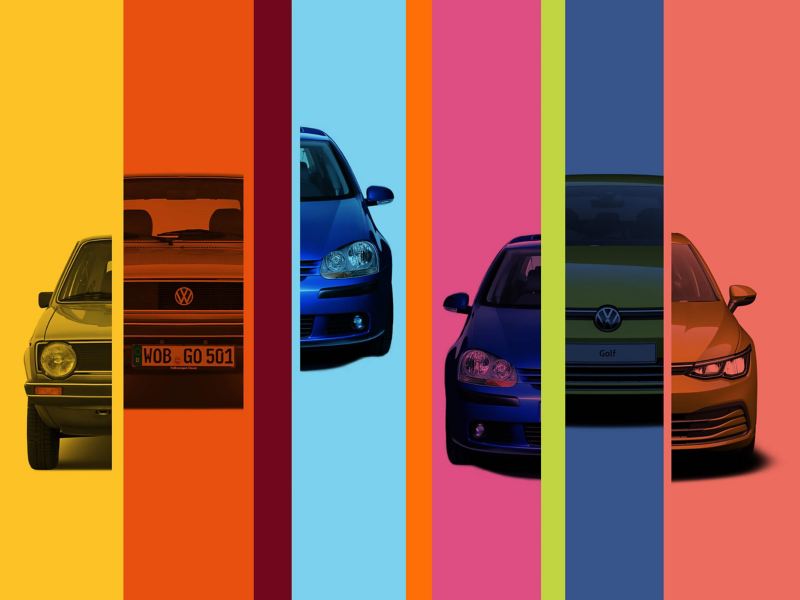